Two of the first parks I traveled to were Sequoia and Kings Canyon National Parks, located next to each other just east of Fresno CA. On my first day I drove the entire length of the Kings Canyon Scenic Byway, starting in the foothills of the Sierra Nevada mountains traversing through Grant Grove and going down the mountainside through Sequoia National forest, finally ending in Cedar Grove in Kings Canyon. More than once what I saw took my breath away. I remember instinctively reaching for my cell phone to text my ex-husband as Kings Canyon exploded into view in front of me, the magnificence of the park had made me completely forget everything that happened for a split second. It was this defining moment that made me realize the true power of the National Parks, Kings Canyon has remained one of my favorites because of this and can be said to be my inspiration for this journey.

I made my way back out of Kings Canyon and stopped at one of the ranger stations to get some advice on where to camp and hike. I settled on two smaller day hikes in Sequoia: Morro Rock and Big Trees Trail. The first hike, a stairway climbing over 300ft to the top of a granite dome, gave incredible views of the western half of the park known as “The Great Western Divide”: 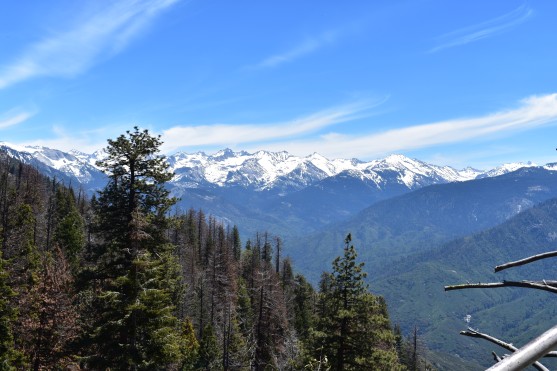 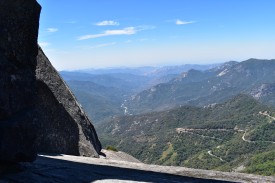 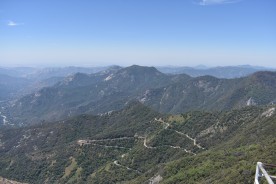 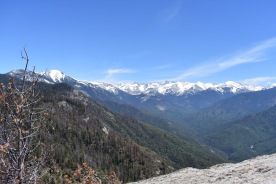 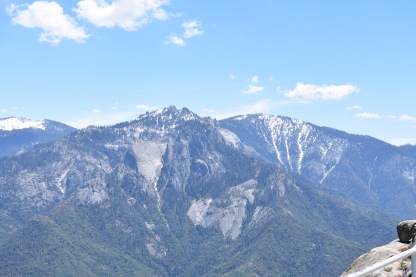 The second hike, Big Trees Trail, was 2/3 mile hike through the serene giants that make up some of the largest trees in the world. While not quite as back-country as I have grown to like, and not as large as the giant redwoods I visited later, I was still amazed at literally how big these guys are: 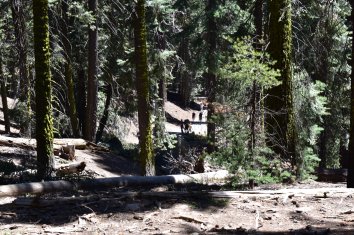 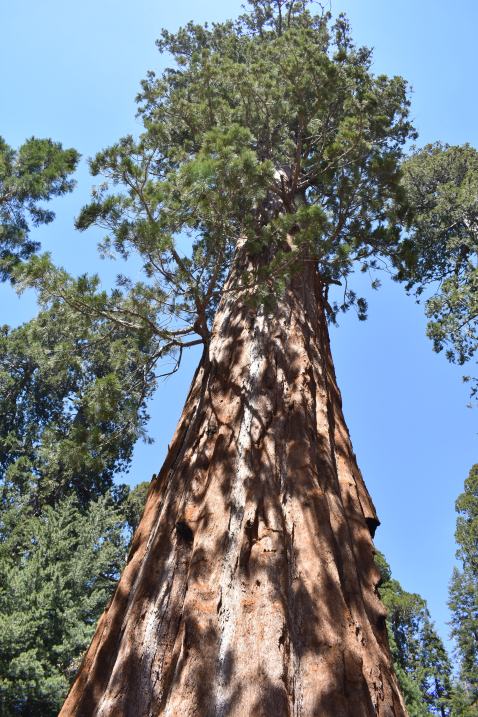 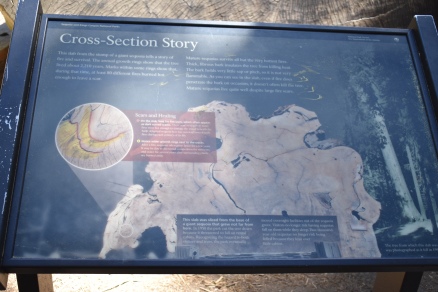 Upon completing these smaller hikes I started the drive back down into Kings Canyon, this time recording it on the cheap dash cam I had purchased. Since it only recorded in 720p and my windshield was dirty, the footage it recorded was terrible and this has been my biggest regret since I started this journey. Below you can see some of what I recorded and understand, but it was neat to be able to drive through a tree tunnel:

Later I would view this footage and decide to upgrade to a GoPro and DJI Drone in order to get better quality videos that could be used in VR headsets like I wanted. Regardless, the time of year I went was perfect as the snow was melting which created white-rapids the entire length of the kings river which can be seen towards the end of the video. I promise I do get better at recording my drives and hikes through these parks!

Highway 180 ends at the ranger station for Kings Canyon so I stopped by to talk to these guys as the campsites I saw on my way down were closed due to a controlled burn in progress. They informed me that it was free and no permit required to camp anywhere in Sequoia National Forest as long as I was at least 500ft from the road. I drove back out to one of the ridges that ran perpendicular to the road that I saw earlier, pulled off and parked, then proceeded to pack my backpack.

This was only my second foray into backpacking and at the time not only was I lugging around an 8 person sleeper tent I also packed everything I thought I could possibly need (and didn’t end up using almost all of it) including 2 gallons of water. Needless to say I learned quickly that future endeavors would require less weight but I was able to puff through the 1.5 mile hike to the end of the saddle. This campsite is the same as I describe in the original post in My Story and seemed like it was made just for me, waiting for my arrival. As the sun set I took some photographs of my surroundings for the night: 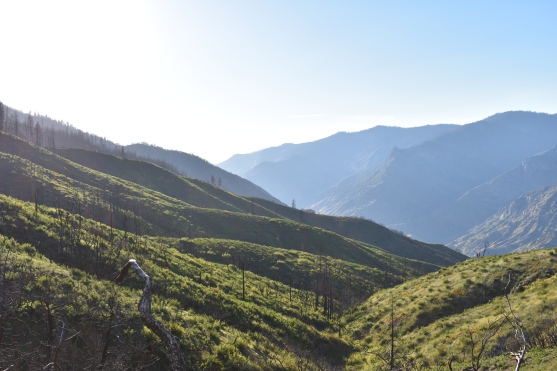 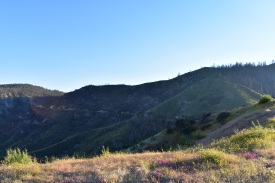 Fighting off mosquitoes turned out to be my biggest learning experience because of all that I put in my backpack I only had a few packets of ‘bug repellent’ in the first aid kit which proved to be all but useless against the needle nosed onslaught. I managed to get a few shots of the beautiful sunset before succumbed to the biting insects and retreated to my tent to finish unpacking: 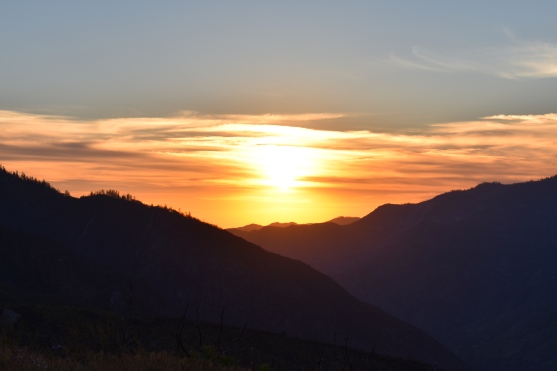 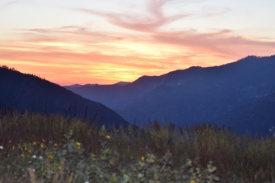 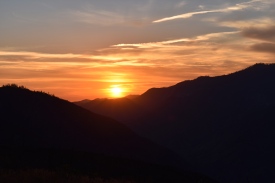 Fortunately the campsite came equipped with a firepit and a pile of collected wood which I hastily put to use in order to smother myself in smoke to repel the mosquitoes. 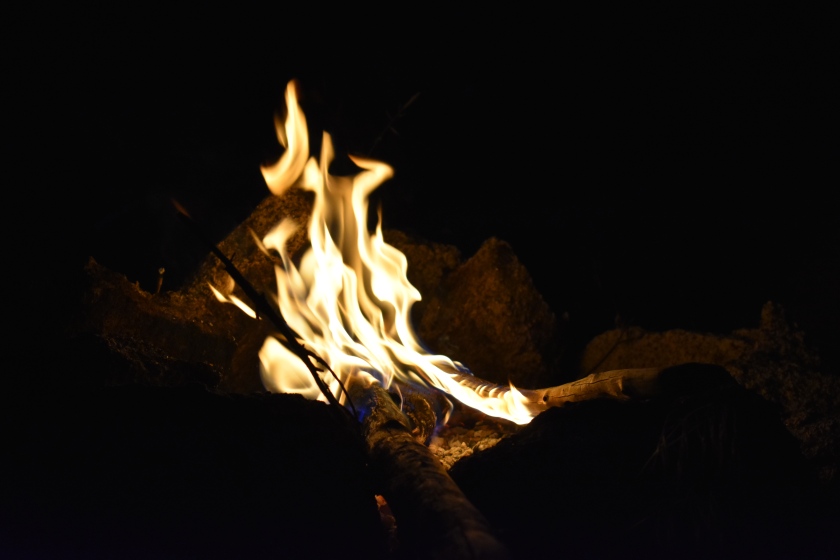 After a quick dinner I headed to bed as I was exhausted from the days hikes and quickly fell asleep to the sound of a thousand crickets chirping softly nearby. While the stars here were also amazing none of the photographs I attempted to take would turn out (I later learned the appropriate settings from someone I met in Gerlach NV). I awoke the next morning and started to break camp while taking a few more photos before leaving and heading back down into Kings Canyon to get some photos of the River and waterfall in the morning light: 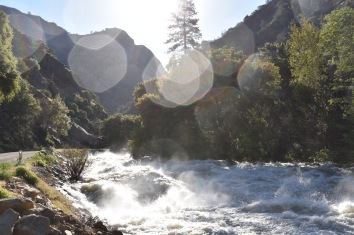 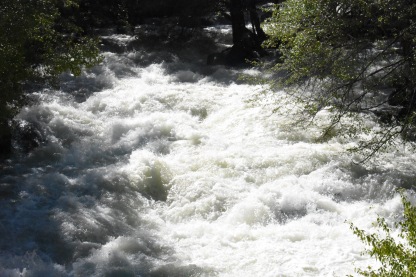 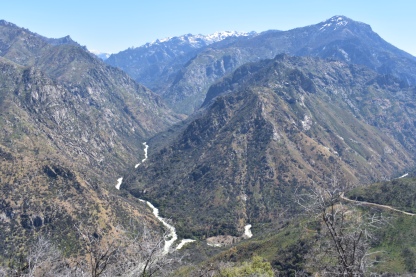 After taking my fill of photos I headed back out of Kings Canyon for the last time heading towards my next destination: Gerlach Nevada.

You can find my complete photo set for these parks in my Sequoia and Kings Canyon album and are free to download.